Android and iOS users who loveÂ foosballÂ I have prepared a list of 10 foosball apps for your devices. If you want to enjoy a goodÂ foosballÂ match on your Smartphone, check out my list and you will find the app you will like, no matter whether you are an Android or Apple lover.Let see one by one theÂ bestÂ foosballÂ apps for Android and Apple 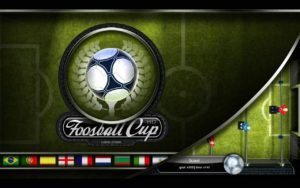 First, you can play Quick Match and Challenges and you can choose the table, the table size, the players, the ball, almost everything, but you have to unlock it first. This is the game which will make you feel like you are playing the real mini foosball table.

AnotherÂ foosballÂ game app from Ludus Studio is the Foosball Cup. It is not as good as their app we have already mentioned but it is still pretty impressive. The app is a little chaotic when you open it because it doesn’t have a menu, everything is listed on it.

You have so many options to choose from, you can choose the team, the game mode, the table size, the difficulty the foosball layout, pretty much everything. The match itself is cool because the ball acts naturally and you have to spin the rods, not just touch them.

This is the best app for iOS devices on this list, although there are only two iOS apps on it. It offers so many options, you can choose the difficulty, the color of your uniform, the camera view (which I havenâ€™t seen in any other app) and the game is pretty smooth. The ball flies on the field and the players are really easy to control. It was a joy playing this game. 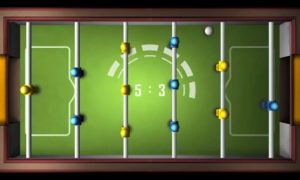 This app is actually called the Foosball 2013, but I prefer the Foosball name. On the main menu you can choose the game mode and when you enter the mode, you can choose other things like the difficulty, the foosball layout, the duration of the game the color of your team and other things. During the match, you can hear the crowd cheer and move the players you have to move the rods on the screen.

Illusion Labs did an OK job with this app for iOS devices, but I am not really impressed with it. It looks like it is made for kids or rookies because you canâ€™t change many things and rookies wonâ€™t mind that. You can choose the difficulty so you can improve your skills with the game, but that is pretty much all.

NAVU has made a pretty impressive application which looks different from the rest of the apps. It is made like a cartoon and everything is in blue and red. 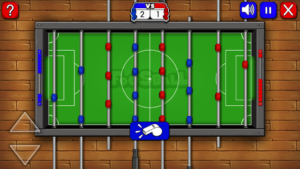 The main menu has only two icons and that is to choose the game mode and that is pretty much the only thing you can choose. So, not so many options but sometimes they arenâ€™t needed. I donâ€™t like the fact that you use arrows on the screen to control the players, you donâ€™t touch the rods.

Another pretty simple game without so many options is Foosball 3D. You can choose how many players will play the match on the main menu and the match starts. Here, you can’t even choose the color of your team.

I felt rather clumsy when I played this game and I have experienced dead balls so it won’t be my first recommendation for aÂ foosballÂ game. Maybe for rookies.

Honestly, this app looks like a school project. It doesn’t have a real menu but it has some kind of menu, I am not sure how to call it. You can choose two options, to change the color of your uniform between red, green, yellow and blue and you can choose how many goals should one team score to win (3 or 5). Also, this game can only be played between you and the CPU, because this app doesn’t have the 2nd player option.

The design itself looks pretty average it is not anything spectacular. When you open the main menu you can choose whether you want to play a single match or world cup and you can change difficulty. You can choose the team out of about 12 national teams which is OK.

The player control is extremely simple you only have to move one of the players left or right and they will move altogether. Now, here is one interesting thing. The game doesn’t have rods so they look like football players, notÂ foosballÂ players.

The game is extremely simple, the design looks like the game is made in Minecraft, except the ball. You can’t choose much in the game, you can choose the number of players, the difficulty and how many goals should one team score to win.

I really don’t like the fact that the app is filled with commercials. I know it is a free app and they have commercials, but this one has them too many. After every match you will have to wait few seconds for commercial to be over and that can be frustrating.

WHEN DOES INJUSTICE 2 COME OUT IN ANDROID, IOS

How Does the Internet of Thing WorkÂ Â