Unmanned Air vehicles has promised more and been delivering the same over time. Demand for Unmanned vehicles has been increasing due to it’s vast application Radar because of the recent incidents where Life of Humans are being lost in various situations like Saving others in Fire Accidents and in various number of accidents. Use of these unmanned vehicles in that area is being encouraged largely in recent times. Use of this Vehicles to record Video and also to take pictures in area where we can’t.There are various Size in these vehicles from a plane sized one to a Nano sized which can fit in a Hand.

Â These two are quite heard one,though many of them think both are same but they aren’t. Quad copter which consists of four propellers as the name suggest’s. Drone unlike Quad copter can be of any propellers. Quad copter belongs to Branch of Multi Copter’s.Drone’s are different to that of copter’s.
The operations of both being the same when you look from the outer side but in depth, there’s a lot of difference in operation. You can know the difference only when you make one.

Zano, the name may be a little funny but their vision for Drone you can leave it with out praising them for their unanimous effort. Now this a typical Drone, unlike many Drones which will Drain you wallet. This master piece is Autonomous, Intelligent,Develop-able. This is the Most sophisticated Drone you will ever meet. Now we will mask into this and let you know why all this applause for this Nano Drone Zano.
Â  Â  Â  Â  Â  Â  Â  Â  Â  Â  Â  Â  Â  Â  Â  Â This Drone is your personal aerial photographer and Video recorder Platform and the most important part is it fit’s in your Hand and can fly by itself and also can be controlled by Smart Phone.

Connect to Your Mobile 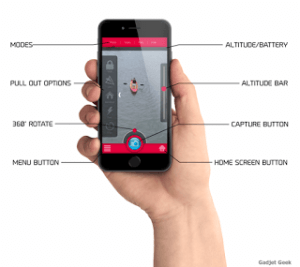 what’s Inside Zano that makes a ordinary Drone differentiate from it . It’s made of sensor’s WiFi Module , all kind of stuff and mainly with the the processor, which controls the whole thing. By which it is connected to our Smart Phone. They developed a App which can connect to Drone ,the operation of this drone controlled by this app or you can set it in Auto Mode where it Follows you at a particular distance unless you change the Mode.

It will come with a Case where the Drone easily fit’s, which makes it easy to carry and use and it will come with removable batteries that make it easy when it get’s struck but hope it doesn’t.
Â
PS: Drone, these are pretty cool stuff to play and if you want actually to make one you can use Â comment section where we can carry out the discussion and i will present you with the detail step by step Â instruction on how to make your own Personal Quad copter or Drone.Â Â