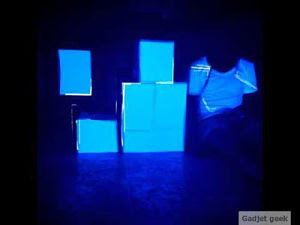 For the party maniac’s this Heavy M projection mapping is like fun to use Â and for those who like these colorful effects on the objects around you and who likes the way the lighting around you changes the way following the Music it plays.Now you might be having a Â basic level knowledge on how these Â effects are done by professional which involves heavy work and setting but here is a Device ( precisely software ) for those who like this effects and want to use at your Home. HeavyM Â is a company which is responsible for this device which helps to map your projections in your Personal Computer (PC) to the real World.Now let’s dive into this Topic of projection mapping and the device which they created.

Projection Mapping which is also known as video mapping Or Object Mapping is a technology used to turn objects in real life’s regular or irregular into a display surface for video projections. These uses the concept of Spatial Augmented Reality. Previously I have discussed what is Augmented Reality and Virtual Reality inÂ Oculus RiftÂ article. Simply Augmented reality is Â arranging something on the real life objects. Virtual reality is taking into the new world. So nothing is to be said it depends on Augmented Reality (AR). Don’t think Object’s means only small object’s these vary from a Block of the cube to a Building or a Monument or theoretical stages. Generally this technique is used by artist’s advertisers but from now on you can also use this.

This is a Projection Mapping software, where the computer in which the software is running is connected to a projector and this projector will project the images on the structures Or objects. Now Technical in that it is as simple as using Paint Tool in Windows of your PC. Initially, time will be taken for learning this software, once when you get used to this, then you will play with it.
You May like to read more about
Â Photo recovery Software
Zoho CRM Review
This will come with plenty of effects and recent update included 10 more 3D effects and included Beta version in this. Now some of you may be biting more creative about this object’s, so they have also included an OLGA Creative Â Kit which contains a ready to make your own design able Objects which you can arrange to your walls. These are objects prepared by papers, Plastic facets which will be helpful in Do it yourself structures.You can assemble and disassemble in many ways required by you.

This video is from on of the CEO of Â Heavy M Â company and the main brain behind this creation and you can also see the radar of this application and the wonders it can do. Go on create your party setting with this.
SOURCE:Â Heavym
Thanks for Â Reading the Article I hope you Share the Article have a nice Day

Zoho CRM Review with all detail of CRM Software of Zoho.com