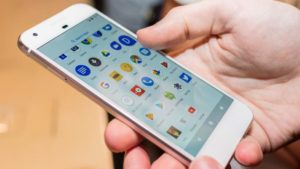 The October, 4 events from Google has brought up a new dimension to the product portfolio of Google. Pixel is the new in-house handset that appears to be an attempt to move away from the Nexus brand. Google has launched the new series Pixel with two new devices Pixel and Pixel XL.
We present the Google Pixel review for the benefit of our readers.

Google Pixel Looks and the build

The design language of Pixel devices remains the same as the Nexus brand. It comes with the same rounded corners that were found on the Google Nexus 5S. However, apart from the looks, Pixel differs from the Nexus with its metal build. Seems Google is making an attempt at posting a competition to the likes of Samsung Galaxy S7 and iPhone 7.

There is no branding as it used to be with the Nexus smartphones â€“ the rear has a big G to indicate that the phone is from Google and thatâ€™s all it has in the name of branding. The new device is available in Quite Black, Very Silver, and Really Blue color options. The Really Blue variant will only be available in the US.

The design language on the back is completely different compared to competing devices. Almost one-third of the top side is glass and the rest is Aluminium. The glass at the top does give an odd look. All said, the design is much premium, that is for sure.

The display is at its best and aimed to bring out the best in Android. Google Pixel is blessed with an inch AMOLED display at a full HD resolution. The AMOLED screen ensures that everything on your screen is crystal clear.
The display does support DayDream VR. For those who are unaware, the DayDream VR is the new virtual reality platform from Google. Actually, that should be the only difference between Pixel and Pixel XL.
The latter has a qHD resolution and a screen size of 5.5 inches.The viewing angles are perfect as also the outdoor visibility.

The smartphone is powered by a Qualcomm Snapdragon 821 quad-core processor. You have access to 4 GB of RAM that works wonders. In fact, that much an amount of RAM would be more than enough for all your multitasking requirements.
There is a 32 GB of internal storage keeping in tune with the recent flagship devices. The 16 GB devices seem to be going obsolete. There is a 128 GB version as well at a little higher pricing. The Pixel phones do not have expandable memory options. But you have access to unlimited cloud storage with the device.

The rear camera on Pixel has a 12.3 MP resolution. It has a f/2.0 aperture which can be good for low light photography. Google has claimed that it is the best-rated camera on a recent DxO result. However, we may need to wait for the actual results in the practical world. The spec sheet on paper looks awesome and efficient. The camera does have dual tone flash.

The front camera has been upped to 8 MP from the 5 MP one on the Google Nexus 5X. Please note that we are comparing it to Nexus 5X as it borrows heavily from the device.
For a real world camera reviews, we may need to wait for users comments once the device becomes available globally.

The Pixel smartphone comes with Google Nougat preinstalled â€“ with the latest Android 7.1 on the phone. As we are aware already, the latest iteration of the Google operating system has a new app drawer. There have been several subtle changes in the navigation buttons, app dock, and the Google Search icons.

The USP of the Pixel smartphones is the new Google Assistant. Google has already presented us with the new Personal Assistant preview on its new messaging app â€“ Google Allo. The Google Assistant comes built in and can be accessed by long-pressing on the Home button.
Google Assistant is indeed the best feature on Pixel. We can go to the extent of stating that it can definitely be the sole reason for your opting for the new Google offering.

The assistant can learn from your searches and usages over time. The voice assistant can understand your queries on a contextual basis and that would be the best feature as you can converse with it as if you are talking to a real human being.
Rest of the software should appear familiar to a regular Google fan.

Google Pixel is powered by a 2770 mAh battery that is nonremovable. We assume it should be able to provide you a backup more than a day after a full charge. Given the advanced Dose features on Android Nougat, that should not be a far-fetched possibility.

Google has claimed that the battery has a faster charging. It has been claimed that 15 minutes of charging will assure a backup of 7 hours.
As far as connectivity features are concerned, the phone packs in a host of them â€“ NFC, WiFi and Bluetooth 4.2. The phone does have support for nano SIM. The phone does feature headphone jack â€“ that should be a great relief for the audiophiles.

A few Pros and Cons

Well, though Google Pixel appears to be one of the great devices from Google, there are some lacking features we could observe. Maybe we can expect the changes quite soon.

â€¢ High price not justified
â€¢ In spite of being a premium device, it has no water and dust proof properties.

Well, we guess it would be too early to reach any sort of conclusion as yet about the worthiness of the new Google product. We may need to wait for the actual performance to show up. We do feel it is a nice device with all those nifty features and looks â€“ more so, the able personal assistant in the form of Google Assistant. Except for the price point, we guess it is the great phone to have a look at.

I hope you like the Article on Google Pixel Review ,Please Do share your thoughts in comment down below and you Buy Now Google Pixel from Flipkart

Happy Shopping, have a nice day

Sony Xperia XA Review with Pros and Cons by expert