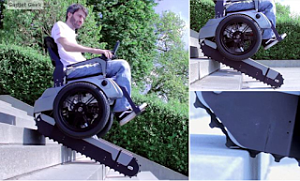 Now Â they are many prototypes and also the projects which came to live for physically disabled people. Scalevo Stair case will come into rescue to Â overcome the weakness of their lost hand or leg , Students, developers, researchers are working on that part to build an appropriate resemblance of Human Body parts and integrate with Artificial intelligence and which can be controlled by Brain. Scalevo Stair case is one of it kinds.As I have stated in the previous post ofÂ Arduino.Â , Where a Guy name Easton Lachappelle, who worked on a project of the prosthetic limb to reduce it costs and also to improve it features and succeeded in it.

Â Many of them worked on Wheelchairs for those who lost their legs, to help them travel the World. Many organisations, hospitals has also built a Level Platform instead of Stair case’s for them.Now here the students of ETH Zurich to Help the people who lost their legs to climb stairs using this Wheel Chair.

Â This scalevo stair case Â Wheelchair looks like a Conventional Vintage Model, Those who have a Look at this may be saying that it doesn’t contain any updates rather than aligning a Tread at bottom of it, but what are you thinking is Wrong. This is not just update to the conventional design, they remodeled the whole design aligned a thread at a bottom and also a Jack to align the position of the seat while climbing or while moving down. 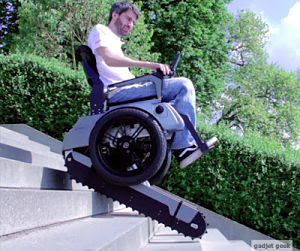 The Tread’s which they Provide for Scalevo Stair case are not like Sliding one they are designed with a material of higher friction, you can look it up in the video where you can witness the friction of that material and the strength it provides due to that.

Why ? what’s the need of self-balancing in it? this might be your question.I will clarify that when you are climbing stairs it’s not designed in the way which it could climb forwards as the gravity and the pull of the body may over and you can fall backwards. So they designed it in a way, where you should climb it Backwards, So for each step self-balancing is required and also the Height adjustment is also required.( if you can’t understand, you can have a glance on video then you will get a much better understanding of this concept.). As on a Road you will not require thread, so it’ll switch it up its mode and Tread goes back and wheel’s comes out.
There are no technical aspects over here as they used just the common wheelchair and adjusted it with Tread for climbing and Mechanical system for Stabilization and to help it to climb without fall.Here you can watch this video and you can get an overview of it.