What is blockchain technology in banking?

We have heard of Bitcoin. It is a digital currency that works independent of the central bank and thus runs its own economy. What makes it possible is the technology referred to as Blockchain Technology.

There can be different types of blockchains â€“ Public or private. These can be used to send and receive the value to anybody, anywhere as long as the blockchain files can be accessed. Each of these blockchains can be considered to be an online database. These databases are stored in a distributed peer to peer manner. 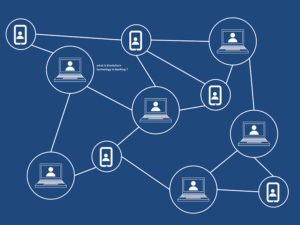 How can Blockchain technology help you in Banking Industry?

Let us go through key areas that blockchain technology can have a helping hand for the banking industry.

Banks and financial institutes spend a considerable amount of money on Know Your Customer or KYC implementation. The norms have been set to avoid the terrorist activities and money laundering by making banks strictly follow the activities to identify and verify their clients.

Blockchain technology can allow the KYC details obtained by one bank to be accessed by another bank. Thus there would be no need for each of the banks to conduct the KYC procedure. Once done with a particular bank, the details can be accessible to other banks as well. This would reduce the costs incurred in the administrative department to a considerable extent.

This is an area that banks spend a good amount of money. Keeping the records of loans and other securities costs banks billions with the current kind set up. Blockchain technology, if employed, can work towards reducing this cost as well.

Payments are an area that can see a high degree of transformation with the Blockchain technology. There would be the considerable reduction in the operational costs.

The blockchain concept can bring a new faster performance in the payments functionality of a bank. In fact, it will also introduce the higher degree of security in the payments – whether to the clients or between the banks. In comparison to Blockchain technology, the current system has a considerable number of intermediaries involved. Reduction in them through Blockchain would go a long way in making the transactions more secure.

Well, this should be an important aspect that should favor the use of blockchain technology in the banking sector. This will do away the intermediaries and that alone can go a long way in reducing the possibility of frauds.

With the current system, banks work on a centralized database model. This can be quite vulnerable to cyber-attacks or another kind of hacking. The centralized database system has only one access point. If the hacker gets access to it, the whole database would be accessible to them. Blockchain, on the other hand, has a distributed model wherein it is made of blocks and each block has a timestamp. This can go a long way in eliminating a majority of crimes being reported in the financial sector.

Trading has been dependent on paper for the most part of the world. There have been demands for digitization or modernization of the concept. Blockchain technology can indeed be helpful in that direction.

Trade financing is an important arena that can benefit with the Blockchain technology to a greater extent. However, trading is an area that involves a lot of parties including the traders, ports, shippers and the customs. Introducing the digitalization in each of these entities is bound to take time, but still â€“ Blockchain has a lot of potential in being able to achieve the digitization, and thereby enhancing the efficiency of the system. However, this is an area that would take a couple of areas to be completed.

Are there any Issues in Implementing Blockchain technology in banking?

Well, Blockchain is indeed a newer technology. Though it does come with a lot of possibilities of streamlining banking sector, there are a few issues we need to overcome a complete implementation.

There are several laws that govern your privacy. Blockchain technology being used in banking sector needs to have complete compliance with these regulatory guidelines. Only then can we be assured of the safety of the data being circulated through blockchain.

Then, with banking sector being one of the huge ecosystems globally, the blockchain technology you use should be capable of handling a huge amount of data. With hundreds of banking and financial institutes around the world, scalability can be a huge issue that needs to be addressed.

Blockchain technology is bound to offer a huge functionality in terms of the banking sector and its functions. However, to be successful in this venture, banks need to build an infrastructure based on the technology. That has left many of them still in the early stages of development.

In any case, the blockchain technology does have a promising future ahead. Apart from helping the banks reduce their operational costs, the technology can also be helpful in letting them launch new products and services so that they can concentrate on more revenue generation. It is just a question of adopting the technology and let us look forward to a great future.

I hope you like the Article onÂ What is blockchain technology in banking?

A2 Hosting Vs SiteGround Comparison of Web hosting

Top best Wireless Headsets with Mic 2019 with Features of Headset

Benefits Of The Technology In Business Management must read article

How to use cloud computing with detail explanation ?