Motorola has been one of the most trusted brands in India. The success story began with Moto G (3rd Gen) and was carried forward by Moto E series. The G series has been the most popular of all Moto devices so far. The perfect balance between price and features along with the timely software updates have been the prime reason for the huge success enjoyed by the series. Now comes the latest entrant to the series – The Moto G4 Plus. This article is aimed at reviewing the handset in a finer detail. 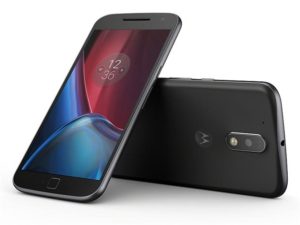 What is so different from earlier versions of the series?

Moto G4 Plus is the first premium device coming from the manufacturer after it was acquired by Lenovo. Though the older Moto logo is still present, Lenovo obviously wants to make Moto a sub-brand of itself. Also, the G series ( or the whole Moto range) is likely to replace the Vibe series by Lenovo.
Another distinguishing point could be the camera performance. Motorola has always struggled with the camera department. Moto G4 Plus attempts to change that perception.How far does it succeed in this venture is still to be seen. 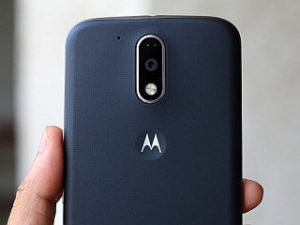 The look and feel are completely Motorola specific. The metal frame with rubber back provides you with a good grip. The phone appears a little larger compared to the older devices in the G series. That is solely because of the 5.5-inch display that the comes with.

The power and volume buttons are on the right side. The power button is placed above the volume buttons which makes it a little uncomfortable. The headphone jack is positioned on the top and bottom houses the micro USB port. The rear side is made of a matte finish. However, the back cover has been found to accumulate smudges.
The build quality is up to the mark. One disappointing aspect would be the lack of support for water resistance in comparison to the predecessor.

Motorola;s latest device comes with a 5.5 inch full HD display. The display does offer you a good sunlight legibility.The color saturation is quite good and blacks are clearer. There is also the protection by Gorilla Glass 3.
The display has two modes viz Vibrant and Normal. The Vibrant Mode saturates the color temperatures, while the Normal Mode appears to be more natural. The viewing angles are fairly good.

The Hardware and Performance 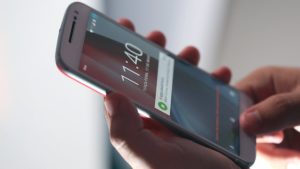 The Moto G4 Plus is powered by Qualcomm Snapdragon 617 processor. It is an Octa-core processor that runs at 1.5 GHz. The same processor was earlier seen on HTC One A9. You get 3 GB of RAM coupled with 32 GB onboard internal storage. Yes, for the budget minded – there is also a 16 GB version with 2 GB RAM. Graphics are handled by Adreno 405 GPU.
The Snapdragon 617 processor is not a great performer. It will work fine and will be adequate for the day to day performance. If you are looking for a high standard performance that suits a power user, you would better look somewhere else.
The scrolling through works almost smooth, but you may experience some hitches here and there. The games run fine, but you will not get optimum performance at the higher graphics settings. You may need to play them at lower settings. There are instances when the phone gets heated up a little while using mobile data or GPS. The Same case is observed while playing games for prolonged periods. But, the heating up is not that worry some.

The Moto G4 Plus runs on the latest variant of Android ecosystem – the Marshmallow 6.0.1.As has been the usual practice with the Motorola smartphones, the software is almost close to stock Android. It is indeed good to see the trend continuing with Motorola devices even after the acquisition by Lenovo.

There are not much bloatware installed. A few Moto specific apps like Moto Actions and Moto Display come preinstalled. The Motorola fans have liked its devices for stock Android experience. The way the things have shaped up here is good to see. All those features add up to your experience.

Motorola claims to have upped the camera in the Moto G4 Plus. There is a new camera app. There are claims that the camera performance has been improved.
Moto G4mPlus comes with a 16 MP rear camera. The rear camera has an OmniVision sensor with f/2.0 aperture and a two-tone flash. The laser-assisted focus has been stated to lock into focus within seconds. The image quality is quite impressive enough. They have enough details. The optical system is good, and thus, you get quality sharpness in your images. The colors are bright enough both in outdoors and indoors, however, indoor shoots will need you to adjust the white balance manually.
The focus is sometimes what troubles you. There are misses at times. Though the phone tells you that the subject is in focus, but you will only realise that it is out of focus when you check the image shot. Hopefully, the issue will be fixed in the future updates. Another disturbing point is the lack of Optical Image Stabilisation. It could be an issue for those with shaky hands.
The new camera app is quite impressive, Unlike the default Google camera app we have been used to on previous Moto devices, the app is user-friendly with many settings.
The camera can record videos at 1080p resolution at 30 fps. The video quality cannot be treated as exceptional, but is quite good enough.

The Moto G4 Plus comes with a 3000 mAh battery. It may appear a little outdated when we have a look at the phones coming up with almost 4000 mAh capacity. You get a respectable backup nevertheless. Video loop tests show a backup time of around 12 hours. That should be a good performance by any standard.
Moto G4 Plus supports QuickCharge 2.0. Moto ( or Lenovo rather) calls it TurboPower. The phone gets charged to full capacity in just one and a half an hour. With both the SIM cards simultaneously used, you should get around one and a half day backup.
Other features include 4G LTE support, GPS, WiFi and FM Radio. The phone has the latest version of Bluetooth 4.1. There is no NFC support, though. And yes, Moto G4 Plus has USB OTG support. But, you will not get a separate USB cable, though.

Moto G4 Plus definitely has many good points in favour of it. Clear UI without any heavy customisation and a comfortable size are a couple of them. Other features that go for the device include an efficient processor, an improved camera, finger print scanner and a satisfactory battery life. Add to it the global presence enjoyed by Lenovo which makes G4 Plus a good option in the face of competitors like Xiaomi. We were disappointed with the lack of water and dust resistance on the predecessors. But, it would be a good option at the price point that it has been made available at.

Le Max 2 Review Get Special Discount with Flipkart on sale

TOP SMARTPHONES OF 2015 ( BOTH IOS AND ANDROID)

Sony Xperia XA Review with Pros and Cons by expert